This is really an amazing case, when it comes to Crop Circles. They have been popping up all over the planet for quite some time now, the first Crop circle to be officially recognized by the media was in 1980, at the Westbury White Horse in Whiltshire, United Kingdom. However there have been photographs of a Quintuplet in 1978, and of course the famous “UFO Nests” in Australia in the late sixties. A more recent crop circle has got researches baffled, upon closer inspection they have found artifacts buried within the crop circle; the crop circle in question was discovered early morning by joggers on the 23rdof July 1991. this is the largest and most complicated German pictogram. It covered an area of 5,000m2 (6,000 sq yards) and consisted of seven symbols and thirteen circles – with a cross within the circle in the middle, suggesting the ancient sun symbol.

Upon closer inspection of the crop circle one of the researchers Hesemann found 3 plates buried in the design: a bronze, silver and one gold plate. “Plate 1 (silver color) consisted mainly of quite pure silver with an additional ingredient accounting for less than 0.1%. The weight of the plate was 4.98kg (11lbs). Plate 2 (bronze color) consisted of a copper-tin alloy (of which the tin content amounted to 10%-15%), nickel and traces of iron amounting to less than 0.1%”. Amazingly this meant that the silver plate consisted of 99.9% pure silver, that’s purer than sterling-silver!. Furthermore, a spectrographic analysis of both plates proved that they had not been made from a cast but from some kind of conglomerate of silver nuggets and natural copper and tin pieces of the type found in Germany’s Harz forest, not far from Grasdorf. They had been produced, either by heating up to a degree that partially melted the metals or in a low gravity environment. We are left with the question why would a hoaxer would go to such expensive lengths, in terms of cost and effort, to simply pull the wool over the eyes of the press and a few crop circle enthusiasts?” 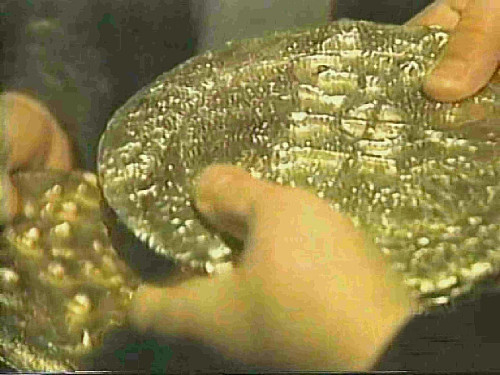 One of the amazing things about these plates is they each contain an exact picture of the crop circle, as seen in the above pictures. 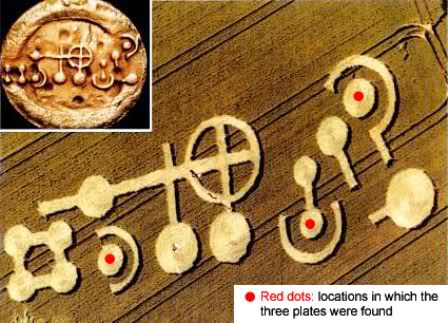 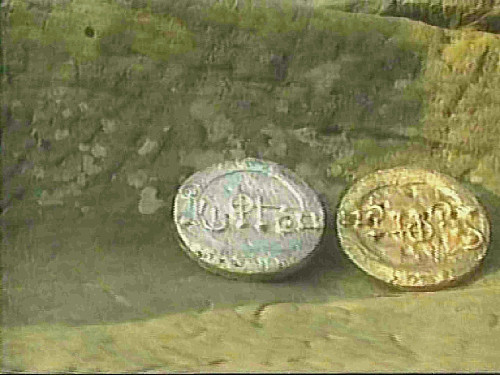 Video
The farmer Werner Harenberg woke up early in the morning of July 23 1991 to discover Germany’s first really spectacular crop circle near the village of Grasdorf, Lower Saxony in the historic Teutoburger Wald Area, not far from Hannover, and indeed not far from the prehistoric site of Externsteine, part natural rock, part carvings, caves and bearing various signs of what seems like long and varied religious practices; and seeing that the straws were unbroken, as it were, harmoniously bended, he stated as much as that it could not have been made by amateurs such as had recently allegedly been at play further north in Schleswig-Holstein. Taking advice from the experience of landowners there he charged visitors five DM three Euro.

Email ThisBlogThis!Share to TwitterShare to FacebookShare to Pinterest
Labels: Alien artifacts was discovered underneath crop circles