The German expedition to Amazonia 1935/37 , The Guyana Project

A graveyard of former Nazis bent on creating a 'foreign Fatherland' in the Amazonian rainforests from which to spread Hitler's maniacal beliefs has been discovered in Brazil.
The relics betray a madcap plan back in the 1930s to create a master race thousands of miles from Germany.
The graveyard and other ruins that fanatical Nazis left behind are chronicled in a new book.
Entitled ’The Guayana-Projekt. A German Adventure on the Amazon’ it says die-hard Nazis believed they were destined to settle the world like pioneers of the wild west in America. 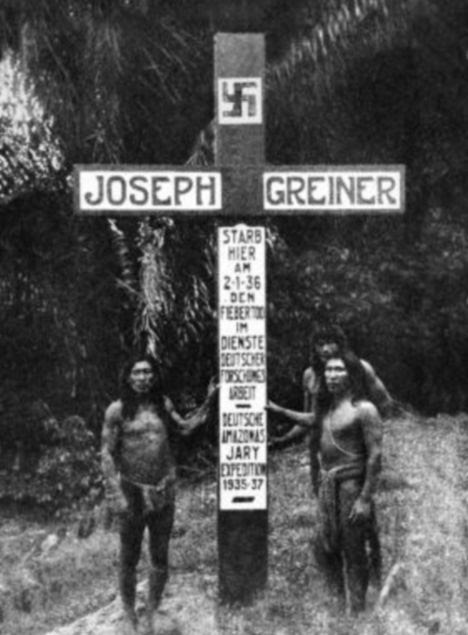 Final resting place: Brazilian natives at a Nazi grave in the Amazon. The wooden cross decorated with swastikas carries the inscription: 'Joseph Greiner died here on 2.1.1936' 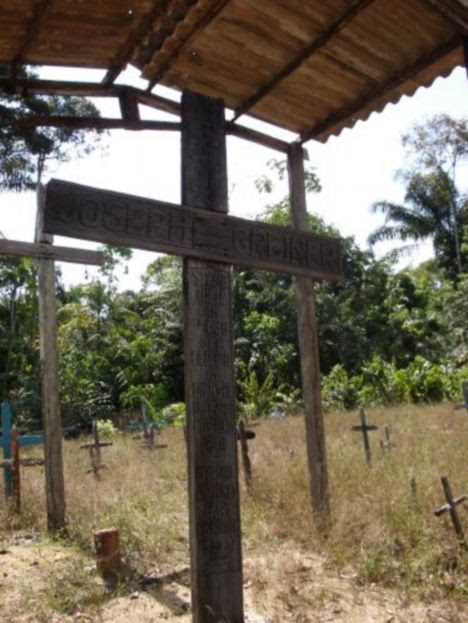 Discovered: Crosses mark the graves deep in the jungle

It has long been known that Nazis wandered post-war into the remote regions of South America, befriended by fascist governments and military dictatorships.
The 1978 film Boys From Brazil told a of a bizarre plot to clone Hitler that was hatched by Joseph Mengele in his jungle hideout.
But the harshness of the Amazonian jungle was a strange choice of destination.
Historical Nazi 'footprints' are found in grave markers with swastikas, photos found in archives back home and the remains of dwellings.
On an island on a tributary of the River Jary in Brazil author Jens Gluessing found a 3,50 meters wooden cross decorated with swastikas that testified to one of the explorers who never made it back to Berlin.
It carries the inscription: 'Joseph Greiner died here on 2.1.1936, a death from fever in the service of German Research Work.' 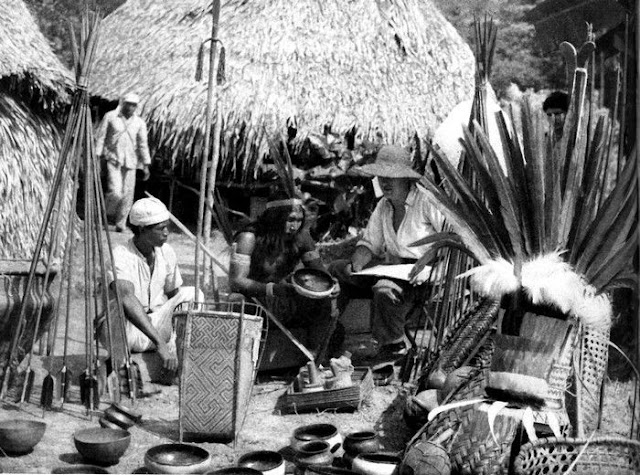 Locals call the site 'The Nazi graveyard' but it was originally destined to be part of a string of Nazi settlements across the Amazon
which Hitler missionaries would use as jumping-off points to spread the gospel of totalitarianism.
In archives of the Brazilian State Department and the National Museum in Rio de Janeiro, Gluessing found details of Greiner’s jungle mission.
Greiner arrived in 1935, bankrolled by the Nazi government and died of yellow fever or Malaria.  He was one of three sent out by S.S race specialists as the vanguard of what they perceived would be a wave of settlers.
Greiner and his compatriots had dozens of helpers with them exploring the region bordering French Guyana with a view to populating it for the Reich.  They also had their sights on the neighbouring British and Dutch colonies. 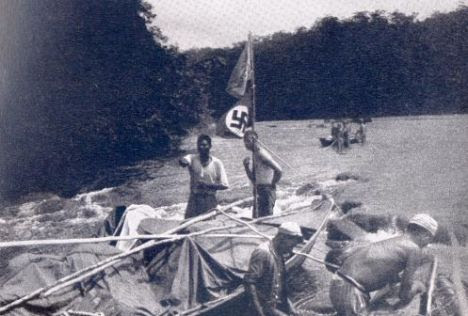 With the natives: In 1935 German researchers went on an expedition of the Brazilian jungles
They sent back to Berlin details of how a German soldiers should live in Brazil, even though their cover story was that they were collecting specimens of fauna and wildlife.
Schulz Kampfhenkel, an officer in the S.S. and leader of the expedition which claimed Greiner’s life, returned from the jungles and submitted to his boss Heinrich Himmler details of the ’Guayana Project.’
'The two largest  scantly populated, but rich in resources, areas on earth are in Siberia and South America,' he wrote to Himmler.  'They alone offer spacious immigration and settlement possibilities for the Nordic peoples.'
As Siberia semed likely to fall at that time to China, he recommended colonising Amazonia for 'people without living space.'
He added in typically Nazi fashion: 'For the more advanced white race it offers outstanding possibilities for exploitation.' 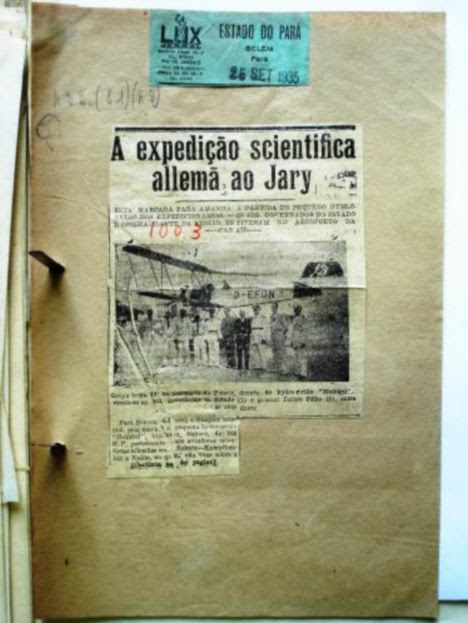 They applied to conquer the Amazon jungle 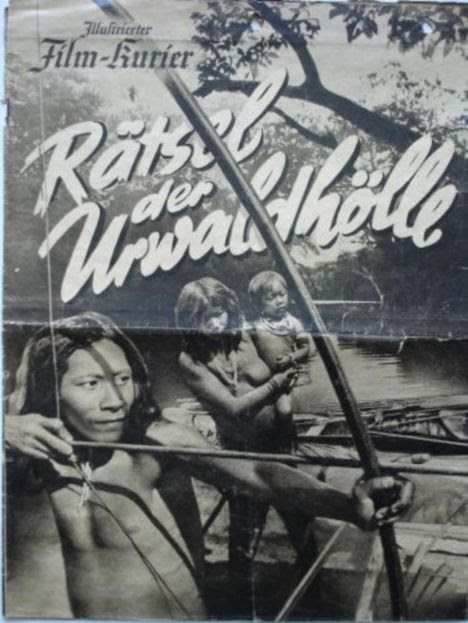 A film was produced showing Greiner's work in the jungle in the 1930s. He believed the Nazis could colonise 'Amazonia'
As befitting an S.S. man who bought wholly into concepts of Nazi race purity he said the people who lived there 'cannot be measured in civilised terms as we known them in Germany.'
With one million German settlers in Brazil already, he argued the seedcorn was already there for the expansion of the Third Reich and that they could secure a 'bridgehead' against American influence in the region.
The author found evidence, however, that Himmler had 'scant interest' in his grandiose settlement plans.  A Nazi film was made of his travels – but no mention made of the Guayana Project: it remained classified by S.S. intelligence.
'Given time, the plan may be submitted again,' Himmler wrote to his jungle emissary.
But his experiences were put to use by the Nazi war machine: he became Nazi Germany’s leading expert in aerial photo-reconnaissance interpretation.
After the war the Americans arrested him and he was placed in a POW camp in Salzburg, Austria.  Released, he died in 1989, still dreaming of a German colony amid the rain forests. 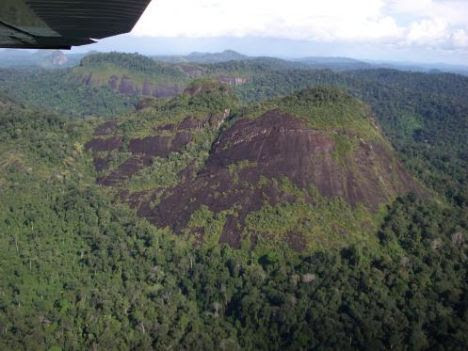 Lost world: The relics were discovered on an island on a tributary of the River Jary in Brazil 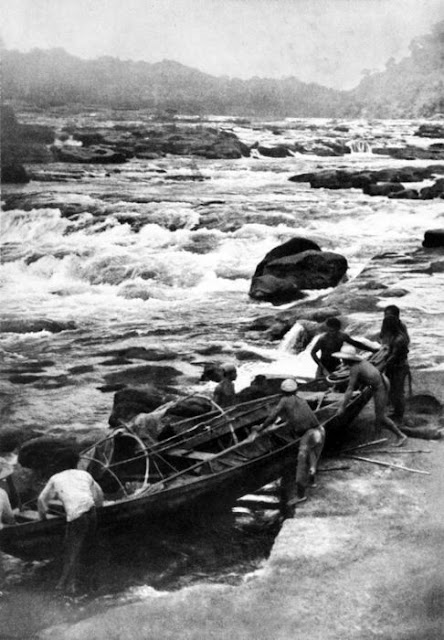 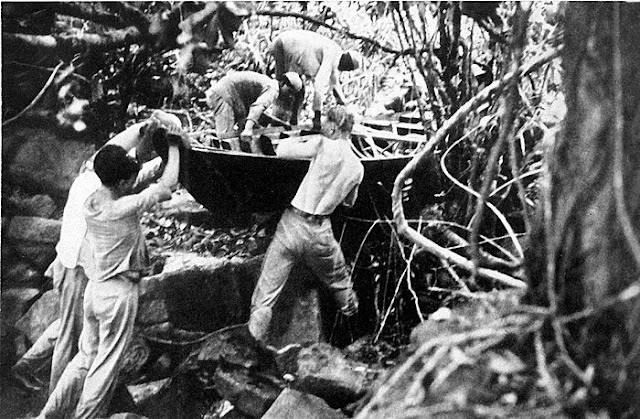 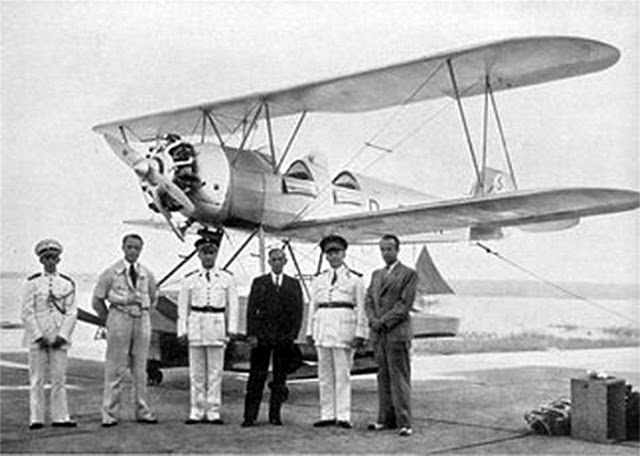 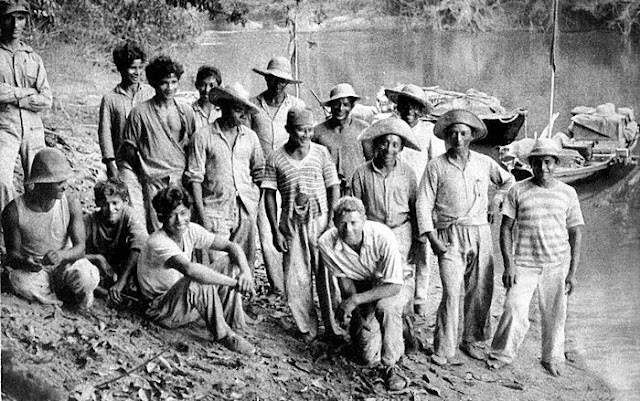 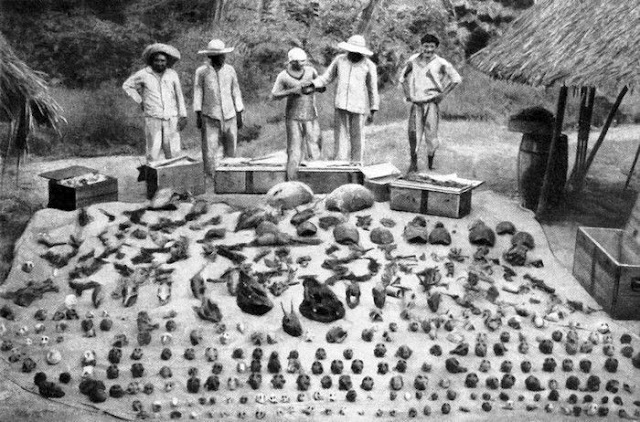 Email ThisBlogThis!Share to TwitterShare to FacebookShare to Pinterest
Labels: The German expedition to Amazonia 1935/37, The Guyana Project